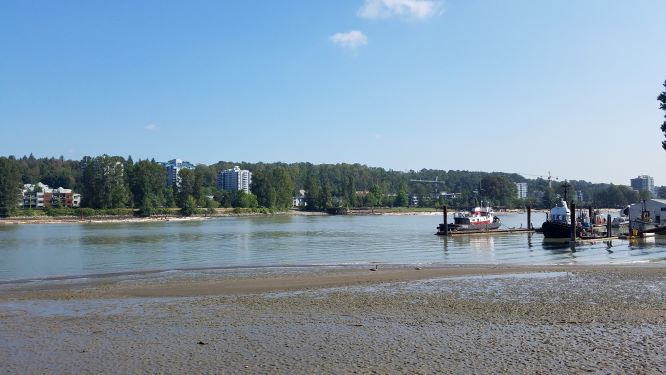 Big cities are not very relaxing for bicycle touring. Vancouver is a big city. We think that—with some experience—cycling in Vancouver would be super convenient. But with just a few hours of time in a city, it is common to end up on a busy street with no bike lanes. It is unnerving. We decided to get started on the tour by getting out of the city right away. There is a bike route on city streets through Vancouver described by the Adventure Cycling maps we use for traveling. Along approximately the same route, there is a “greenway” that crosses the city. We opted for the greenway, and it was glorious. The pavement was smooth and the path cut down the middle of—you guessed it—a greenway. There were two lanes for bicycles and a separate wide lane for pedestrians. We saw many bike commuters and walkers. Many of the intersections gave us the right of way where the cars had stop signs. After many relaxing miles, we exited the greenway and assimilated into traffic.

Our route out of Vancouver took us over a big bridge. There are multiple factors to scary bridges. This one had enough of the factors that even John was a little haired out. Berta swears like a sailor on tall bridges, so that topic is not covered here. The sidewalks/bike lanes for both directions of traffic were on one side of the bridge. Fortunately, our lane was on the inside. We climbed a pretty steep grade while traffic was on the other side of a sturdy divider. The railing across the other lane was at least a few feet away, so that wasn’t particularly frightening. The big problem on this bridge was that the sidewalk was built outside the structure of the bridge. Wide steel beams pierced the bridge deck, where we could see that the sidewalk was about two millimeters thick! And they did a horrible job of working around the beams. Our eyes were drawn to the certain death drop visible through the gaping seams. At one point, as John stared hypnotically at the scary gap, he was drawn towards it. He had to give the beam a straight-arm and then wobbled around it. This was John’s opportunity to swear like a sailor. On the descent of the bridge, we got going pretty fast right up to where the yellow and black “Don’t go this way” sign appeared to let us know that we needed to make an immediate jog to the right. A man was walking up this side of the bridge and Berta wondered if he actually did this often and was not fazed by it. Inconceivable!

The Canadian city of Surrey has long straight multi-lane roads with good bike lanes. Also, it has a lot of Canadians, who are incredibly polite to cyclists. As we pedaled this area, we both noted many business names of Indian origin. We hoped that meant we might enjoy Indian food in the near future. We were in luck, as the man behind the hotel desk said the new Indian restaurant next door has been getting good reviews.  We went there to judge for ourselves. It was wonderful. Our food appeared in beautiful shiny metal bowls. The palak paneer and dal tadka we had were nicely spicy. After we had used the last scraps of our buttery garlic naan to harvest every bit last of sauce, we decided we needed more food. So, when we had a chance, we asked about an Indian dessert we have had before. It is a creamy and sweet pudding, with cardamom and raisins. Some versions include vermicelli, others have rice. We don’t know what it is called, so Berta described it to the server. The woman lit up with recognition and then proceeded to bring something completely different. The server was mortified. The dessert was spectacular. We learned it is called kulfi, and she said it is basically “Indian ice cream”. To try to characterize it seems like folly, but this is a narrative so we will try nonetheless. It was gritty, like malts can be when workers add more malt than the boss thinks they should. It was somewhere near vanilla but not exactly there. This particular presentation was covered with a mound of spaghetti-gauge rice noodles in pink sweetened rose water. They looked good, but they definitely were not something to order on a first date, thought Berta as she slurped one from her chin and reached for a napkin. John wants to know why Berta is always thinking of first dates. The noodles were also way too subtle for us. We say that dessert should slap a person in the face. Whack! That’s dessert. We are going to remember the kulfi.

The drivers in Canada are the nicest drivers. They wait for us, it’s true, but more importantly they don’t seem to harbor any animosity towards us as they pass. When the road opens up and there is an opportunity to pass, the Canadian presses lightly on the accelerator. He pulls wide into the far lane and passes by. That’s it. No drama. We love Canadians! 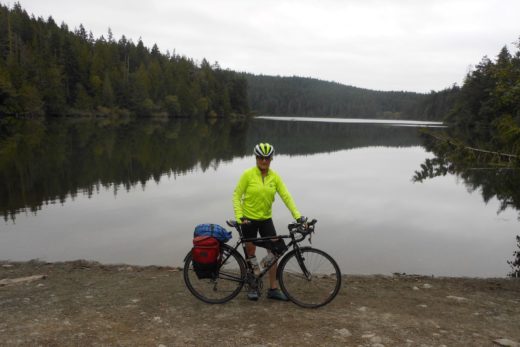 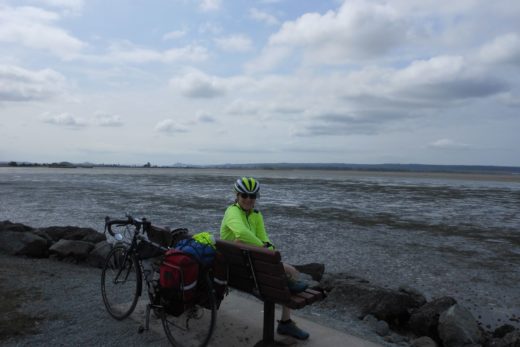