We lacked options in Seattle for spending the night, so we were fleeced again. From the big train station, there are two hotels within a distance you would want to walk in bicycle shoes. We headed for the one that didn’t involve a king’s ransom, and still were shocked at the quoted rate. “Is there something happening in town?” Berta asked, making her displeasure known about the rate as if that would change anything. The clerk said the Rolling Stones are in town tomorrow night. That’s when we realized Honky Tonk Woman was playing in the lobby and that the Rolling Stones are in reality still alive. Our room was not a “view room”, but if the obstruction next door were gone, the pounding noise would be even louder, so we were happy with the lack of view. Just outside our window was Seattle’s massive project to move the overhead highway into a tunnel. It has been going on for a while and is approximately nowhere near done. There was a huge jackhammer attachment on a big earthmover that was breaking big concrete blocks. It was maybe 70 feet from our window, bashing away. The tequila in John’s water glass had ripples like the puddle in Jurassic Park. The tyrannosaurus stopped working at 7 pm. Once we could think straight, we realized that the sky was perfectly clear and it was a beautiful evening. Some seagulls landed on the roof of that building next door and made a momentary commotion like happy hour was in full swing. They flew away and our silence settled in. It is like the hotel shaking never happened.

We walked to the big train station in Seattle at daybreak. Berta gave a well-crafted description of our situation to the guy at baggage claim in the station, but he absorbed practically none of it. He told us he would roll the bikes out so we could load them on the train. Berta reminded him that our bikes are in boxes (she resisted commenting that rolling the boxes would be awkward). “Oh”, he said. On his face, we could read that this was going to be difficult. On our faces, he might have noticed that momentary terror of thinking that he really did not have our bikes back there.  He returned to the baggage room and left a growing line of disgruntled passengers behind us. Before there could be an uprising, he returned to announce that he did indeed have our boxed bikes. It turned out that changing a five-dollar charge for hanging a bicycle by the front wheel to a ten-dollar charge for throwing a big box in the baggage car is not easy. In the end, we ended up paying nothing extra to keep the bikes in the boxes on the train to Canada. Don’t tell Amtrak.

There were no future Nobel laureates on the train from Seattle to Vancouver. The boy in the seats ahead of us needed constant attention to prevent a meltdown. His lesson in life is that if your parents say no three times in a row the next answer will be yes. Meanwhile, two perfect little girls in the seats across the aisle from him made nary a peep. They quietly worked on puzzles in a book and ate some snacks like civilized children. Maybe they are Nobel material.

Our train arrived in Vancouver, British Columbia around noon. Shortly thereafter, our bike boxes were leaned against the chain link fence with all of the rest of the luggage. The fence marked the border between the US and Canada. Our fellow passengers queued up for customs. A Canadian border patrolman told us we could leave the boxes right where we found them. We extracted our bicycles and attached the handlebars and pedals. Some other patrolmen came by to take the boxes. We hitched all of our bags to the bikes in plenty of time to join the end of the line. And just like that, we were in Canada. Another patrolman asked us if he could give us any directions. He, like most people who try to give us directions, offered too many options. Since we already had an outline of our route, we nodded politely and were glad that we could roll off in the general direction he suggested. We ended the day at a “hipster” hotel as Berta called it. It had a black and white color scheme that confused John and delighted Berta.  Some of us think walls should be painted a single color.  We asked to be on the first floor which was actually the third floor. We eyed the tiny old elevator. Berta rolled her bike backwards into the elevator. John followed, rolling his bike forwards so our handlebars would not collide. We managed to fit both bikes without acquiring chain tattoos.  We exited in reverse order. Arriving at our room, we noticed the black ceiling, serious lack of bike parking space, and a spectacular bathroom where Berta had to tutor John on the use of the appurtenances. 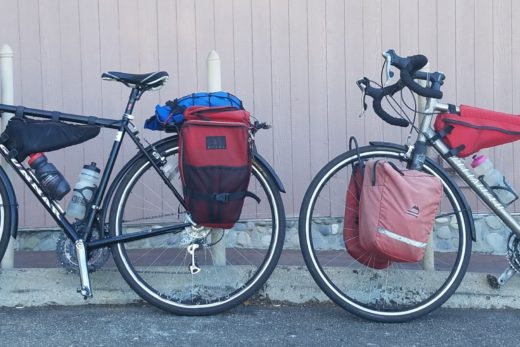 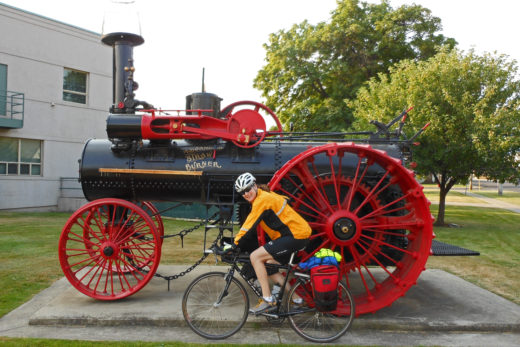 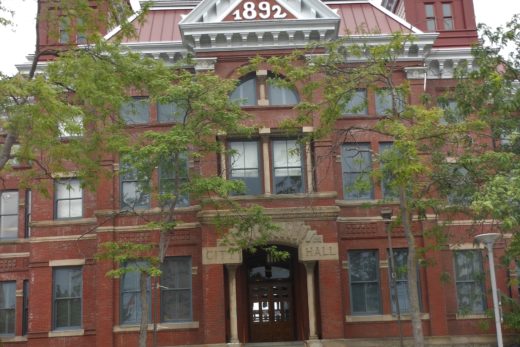